The following blog was written before Project 541 was started - at the beginning of Kayla's dream. 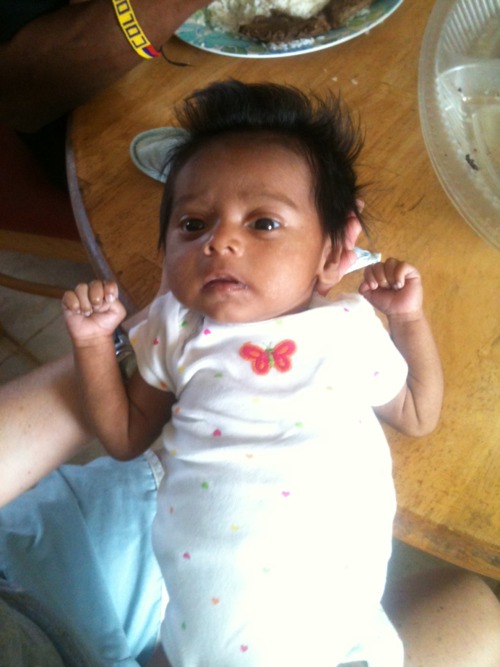 First and foremost, I apologize for the lengthy absence from my blog. Things here in Puerto Lempira have been nothing less than insane. Sadly, one of our babies passed away the other week. Precious Anabel Talia was 6 weeks old when she came to live at the House, fought an unknown illness for about 2 weeks, and finally passed away at 2 am in the arms of her father. Losing a child is never easy for anyone. We feel a certain attachment, and responsibility for each child who comes through the gates to live with us. I felt confused, disheartened, and sad that we had not had more time with her. One of the hardest realities here is that unfortunately, things like this happen often, and people here have become accustomed to death. A typical family will experience at least one death of a child. As awful/strange/terrible as it sounds, it is kind of normal. I got the news that she had died, helped her father pick out white clothes to bury her in, passage money to travel to his village for the funeral, and he was on his way. I looked around me and things were normal. Classes went on as normal, the kids were running around as normal, it was as if nothing had happened, and yet this sweet little girl wasn’t here anymore. I struggled with the simple way that every one moved on from this. In the US if a baby had died like that there would have been tears shed, arrangements made, meals cooked for the family, and heartache. On the outside I didn’t see any of this when Anabel died. But after a few days I started to realize that in fact there was heart ache and grief, it just wasn’t on the surface. I could see the emotion deep within the people who loved her, but it took time to find it.

In the past few weeks the co-volunteers that I have lived with, and grown close to in the past year have all made their way back to the US. One by one the kids and I said goodbye to them, wished them well on their journey home, and begged for promises of their return. I kicked solo for about a week with all the kiddos. It meant an early rise every morning, and a late bedtime every night. The work that had been split between 4 of us now was my responsibility alone. The kids were actually very well behaved, and understanding that I was running around like a chicken with my head cut off. They were helpful, and self sufficient as much as possible.

Esteban lives with me full time now. He has been a full-timer for about 3 weeks now. He’s learning some sign language, getting fatter by the day, and even starting to form new syllables when he babbles. He’s starting to be able to crawl by pulling himself in an army crawl across the floor. His toy cars are great incentive for exercise, and when is crawls now you can see his muscles! Speaking of muscles, I have them! Caring for him has changed both my heart and my body. I am physically stronger from toting him around everywhere, mentally stronger from problem solving with limited resources, and spiritually more patient, loving, and able.

The progress on Arnold’s Visa is… slow. His mother does not have an identity card, and until we can get that, things are at a stand still. I am working with the mayor, and the governor to try and speed up obtaining the card, as it can often take over a year. Once we have the card, it is mostly smooth sailing to the interview at the Embassy. I will not lie and tell you that I am not frustrated and beat down. It bothers me that it is so hard to do a good thing for someone, but I will not give up, will not lay down and die, and will not stop working for this incredible chance that Arnold has in for his life. If there are any prayer warriors out there, get on your knees! We need all the help that we can get.

I am coming up on the 5 month mark quickly. I am planning a trip back to the US in May to visit with family and friends for a few weeks. I am VERY excited to see everyone, get a little rest while I’m home, and return to Puerto Lempira to finish up the summer before heading back to school in the US in August.

Thank you all for your prayers and support. Here in La Moskitia, we need as much of both as we can get!

Desperation: A state of hopelessness that leads to rashness 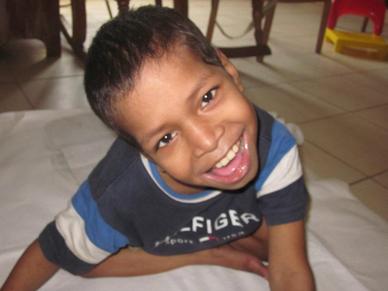 This is Esteban!
He is a precious 10 year old boy with cerebral palsy that I have started caring for during the day. I have known Esteban since 2010, when I visited his house and happened to find him padlocked inside alone, naked, and with ants crawling all over his body. As you might know, cerebral palsy is a disease whose effects vary from case to case. Much like autism, cerebral palsy has a wide range of severity, some people high functioning, and some people completely disabled. Esteban, unfortunately, is one of the most severe cases of CP that I have ever witnessed. His legs are almost completely useless and atrophied, his muscle movements in his arms and hands not controlled enough to even put food to his mouth. He is 26 pounds at 10 years old, so not only does he have a severe disability, he is malnourished and neglected as well. As is sadly common in situations like this, the disabled child becomes a burden, and a source of hatred for their parents here. When talking with Esteban’s older sister, she told me that if Esteban points to food, her mother responds by telling him that if he can’t walk and go poop by himself, he has no right to be begging for food. It is here that I want to tell you that Esteban is one of the most JOYFUL people I have ever been around. He is intelligent, loving, funny, and to say the least easily entertained. He communicates mostly with his eyebrows and laughter, and we are working on some signs for him to tell me when he has to use the bathroom, when he’s hungry (he learned that one very quickly), and when he wants to watch our favorite movie… BBC’s Planet Earth! It is not easy caring for a child like this. The diapers, drooling, dressing, and transporting issues are nothing that I have experienced before. Sure, I’ve dealt with baby poop and drool, but as one can imagine a 10 year old definitely produces more of both (although I have seen some babies that could compete in both quantity and quality). He has taught me the meaning of “the least of these”, and however frustrated, exhausted, or unable I feel I am, I can look at him and see grace that comes from a face that has seen so much hurt, and love from a person that has been so unloved in his life. He just has to look at me and I know that the problems we face here in this world will not be forever. I know confidently that there is a just God that holds a very special place in heaven for people like Esteban. I feel honored to be able to know him, happy to spend my days with him, and grateful for what he has taught me these past few weeks. I spend my days with an angel here, and what an incredible gift that is! 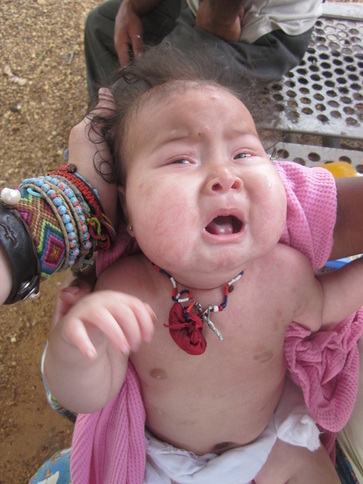 Meet Marisol!
She came to the House of Hope about a month ago at 7 months, and a whopping 7 pounds. At first glance she might appear to be chubby, but she is in fact swollen. When a child is denied proper nutrition their tissues swell up, and they are distinctly swollen, experience hair loss, lethargy, and skin abnormalities. As you can see in this picture, Marisol portrays all of these symptoms. For the first time in my life I watched an IV be given to a child, and no blood come out. The nurses and doctors gathered around to watch, most of whom had never seen anything like it. “Puro agua! Puro agua!” they said, which means, “Pure water! Pure water!” There was so little blood in her body, that when poked with a needle, instead of blood, there was just water. The necklace that she wears is a Miskito tradition. They believe that wearing a red bracelet or necklace keeps the evil spirits away, and in hopes of a quick recovery, her mother keeps one around her neck at all times. This picture was taken in the hospital, but she has now come back to the House, her swelling is going down, and she seems to be getting stronger every day. 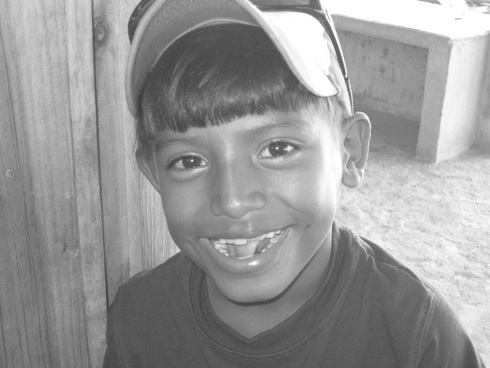 I would like for you to meet Arnold!
I have some great news to share with all of you who have supported me in my missions here in Honduras. After many obstacles, lots of research, and even more prayers, my parents and I have come to the decision to pursue bringing this young man home to live with us in the States, and attend school on an Education Visa. He is an enthusiastic, intelligent, and FUNNY 10 year old, with so much love to give to everyone he is around. One of 10 children, his family is very poor and at the age of 8 he took to the streets of Puerto Lempira, hustling his way out of starvation. This is the fate of far too many boys here in PL, when there is no food at home, they are often forced to become “street boys”. After coming to the HOH he proved just how intelligent he was in the classroom, and quickly became one of our outstanding students. It has been a difficult process already, and it is far from over. However, as a family we are 100% committed to trying to make this dream a reality for Arnold. The first steps are out of the way now, and it is time for the legal process to begin. After talking with Arnold’s mother, we are in agreement that if educated in the US, he will be more prepared and capable to one day come back to this place, and help the community that we both love so much. The road is just now beginning for Arnold, and if any of you are interested in helping with the process, learning more about him personally, or have extra time in your day to pray for this young man, please do so! If you would like to contact me about Arnold’s situation, you can email me at kayla-austin@mocs.utc.edu, or at kmaustin0592@yahoo.com. Thank you all again for your support over the past 2 years, I will keep you updated on Arnold’s visa process. We are well on our way to having a new member of the Austin family! 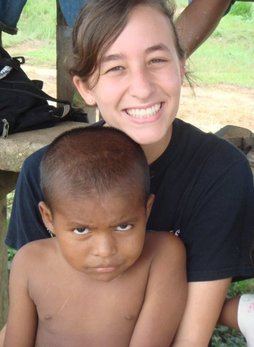